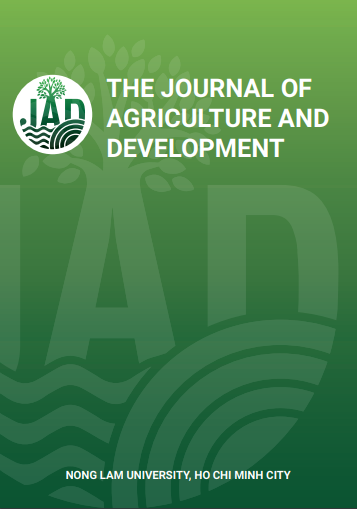 Low-density lipoprotein (LDL) derived from hen egg yolk has beenconsidered an important component in the storage of canine semen;however, in Vietnam, there have not been many studies regardingthis topic. Therefore, this study aimed to evaluate the effectivenessof LDL in the preservation of canine chilled semen in Vietnam. Theassessment of semen samples was based on four criteria: storage time,motility, absolute viability, and integrity of acrosomal membrane atmotility rate 0.9; 0.5 and 0.3. The semen samples collected weredivided into three equal parts, each was then diluted with threedifferent extenders and stored at 4oC. The extenders were LDL +basic extender (LDL), egg yolk + basic extender (EY), and basicextender (C).The storage time of canine semen was recorded from the beginningof monitoring until the motility decreased to 0.3. The storage timeof the three extenders was in the order of EY > LDL > C, with 108h, 60 h, and 48 h, respectively. The absolute viability of fertilizablesperm (Sa5) in the extender was EY (768), LDL (423) and C (280),which was significant (P < 0.001). The percentage of viable spermwith intact acrosome membrane at motility time A = 0.9 in LDLwas 59.31%, higher than that in EY (30.99%). In the storage periodfrom A = 0.9 to A = 0.5, the acrosome loss percentage of both EYand LDL decreased equally (7.30% and 7.23%), but the storage timeof EY (84 h) was longer than that of LDL (48 h).In conclusion, the EY gave a longer storage time, higher absoluteviability and longer maintain percentage of viable sperms and intactacrosome membrane compared to the LDL. However, within the firsthours of storage, the percentage of viable sperm and intact acrosomemembrane in the EY was lower than that in the LDL. Therefore, topreserve canine semen for a short time (less than 48 h), the LDLextender should be used for better effectiveness.

This study aimed to evaluate the non-specific immune responses of macrophages in two selective breeding pangasius family groups: high disease-resistant (A) and low disease-resistant (B) to Enteric Septicemia of Catfish (ESC) caused by Edwardsiella ictaluri. Fish were sampled at five different time points after infection with the bacteria E. ictaluri including before the infection process, 24hpi, 48hpi, 264hpi and 312hpi. There were 372 samples including 192 samples of fish in group A and 180 samples in group B. All of them were used to analyze the amount of melano-macrophage centers in the tissues of liver, kidney and spleen; phagocytosis activity (PA) and phagocytosis index (PI) of the anterior kidney macrophages. Results showed that (1) the number of melano-macrophages of group A fish was higher than that of group B at survey points during the challenge and the difference was significant at 48hpi; (2) PA and PI of group A were higher than that of group B in the period from 48 to 264hpi, specifically, the PI of group A was higher than that of group B, which was statistically significant at 48hpi. The results of this study showed that the differences in non-specific immune responses through melano-macrophages can improve the survival rate and life span of the high disease-resistant family compared to the low disease-resistant family after the challenge with Edwardsiella ictaluri.

This study was conducted to determine the rate of antibiotic resistance, multiple antibiotic resistance of 60 E. coli strains isolated from white-leg shrimp (Litopenaeus vannamei) collected from Binh Dien Agricultural Wholesale Market in Ho Chi Minh City. Should have a short description how to perform the study here Within10 examined antibiotics, those E. coli strains showed a high resistant level to ampicillin (96.7%), streptomycin (70.0%), kanamycin (66.7%), nalidixic acid (60.0%), tetracyclines và trimethoprim/sulfamethoxazole (56.7%), ciprofloxacin (61.7%), chloramphenicol (43.3%). The percentage of multidrug-resistant strains (from 5 to 10 tested antibiotics) was 55%. All isolated  strains were insensitive to all 10 tested antibiotics. Four strains (6.7%) were found to be resistant to all these antibiotics. So what is the conclusion?

Acute Hepatopancreatic Necrosis Disease (AHPND) is a globally seriousthreat, especially for Vietnam shrimp culture since its first discovery inChina in 2009. This disease is caused by toxin-carrying bacteria Vibrioparahaemolyticus whose plasmid encodes for a binary toxin ToxA andToxB. The disease has a mortality rate of up to 100% after 3 - 5 dayspost-infection and fast spread among shrimp culturing regions. In 2017, abacterial strain V. parahaemolyticus XN87 containing plasmid with mutant toxA and normal toxB genes was found. In this mutant form, shrimpdid not show hepatopancreatic necrosis symptoms, but the early mortalityrate in shrimp was still up to 50%. This mutation was called mutantAHPND. Depending on different purposes and subjects, the correspondingdetection method will be selected. Understanding the specific nature andapplication of each method is essential for the prevention and treatment ofAHPND disease in shrimp to minimize economic losses for shrimp farmers. In this review, we summarized AHPND-detected methods based ondetecting genes (toxA and toxB) or protein (ToxA and/or ToxB toxins) aswell as a method for early detection of the mutant-AHPND. Eventually,potential detection methods are also addressed and discussed.

The carotenoid is a natural pigment group, which is gradual of interest because of its essential biological activities and great production potentials such as using low-cost material and easy to apply on a large scale. For further development of natural carotenoid products, in this study, fourteen yellow, red, and orange pigment-producing marine bacterial strains were isolated from 25 seawater samples collected along coasts of Phu Quoc island (Kien Giang province), Vung Tau City (Ba Ria – Vung Tau province), Can Gio district (Ho Chi Minh city), and Thang Binh district (Quang Nam province). These isolates were identified belong to seven genera Micrococcus, Kocuria, Microbacterium, Brevibacterium, Bacillus, Rhodococcus and Exiguobacterium with 96.7% - 100% of 16S rRNA sequences identity. Based on carotenoid producing ability and UV-absorbance profile, three of the isolates including Micrococcus sp. 64A3a (yellow), Exiguobacterium sp. YT09 (orange) and Rhodococcus enclensis strain RSA3 (red) were selected for investigation of carotenoid extraction conditions. Methanol at concentration of 100% with ratio of 1 g bacterial cells/10 mL methanol is suitable conditions for extraction of red, orange and yellow pigments from the isolates.

The study was carried out from August 2019 to August 2020 at five major parks in Ho Chi Minh City. We aimed to survey the lighting system including bulb types, lamp types, illumination type, and average horizontal illuminance. The study was carried out by several methods such as a questionnaire of the characteristics of the lamp, observing, measuring, analyzing, synthesizing data, and evaluating. We divided each park by area, for example, main gate, side gate, main axis, branch road, lawn, activity area for investigation. The result showed that the parks having LED and HQ compact bulbs, which were popular chandeliers. Most parks had direct lighting to provide panoramic illumination, but did not reach the average horizontal illuminance. We propose an aesthetic illumination design for the central area of ​​the park with ideas from the history of the park's formation and development. The research results contribute to the improvement of the lighting system for the parks in Ho Chi Minh City.